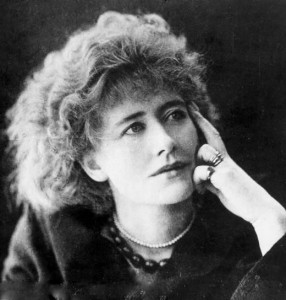 Dame Ellen Terry led a life that was the envy of her contemporaries all over the world. She was married three times – first at age 17 to a man thirty years her senior and then for the third time at the age of sixty to a husband thirty years younger than she. Yet all her marriages failed. Society should have regarded her as a ‘fallen woman’ for she had eloped with her lover, Edward Godwin who was the father of her two illegitimate children.

Somehow the strict Victorian matrons, including Queen Victoria herself, turned a blind eye to Ellen’s bohemian lifestyle and she was loved, adored by the masses and admired by the connoisseurs who worshipped her as a superb actress and secretly admired her as the lover of Henry Irving and the woman who George Bernard Shaw adored and with whom she had a love affair ‘on paper’.

Ellen Terry’s life is colourful and unique. Researched in depth, Ann Rachlin brings the story to life enriched by 70 beautiful images of Ellen from childhood to her old age when she was almost blind and suffering from dementia. Ellen Terry’s story unfolds like a work of fiction yet every word is true. A story of the theatre and the first international Superstar, long before the days of television and the internet. Ann has devoted decades to Ellen Terry’s life story and owns a superb collection of memorabilia collected from all over the world. This fascinating talk is one of the most popular in the Ann Rachlin series.