On Sunday August 9th outside the sun was beating down and the glorious Dinard beach was full of holidaymakers, enjoying the sea and sand. Just round the corner, hordes of children were joyfully skipping their way to the Auditorium Stephan-Bouttet, where they were happy to leave the sunshine and go inside for a concert in French designed especially for them. A regular feature of the Dinard International Music Festival, this year they were in for a very different musical treat.

British ANN RACHLIN is internationally acclaimed for her Classical Music and Stories and her Fun with Music classes and recordings for children. For over forty years, hundreds of children flocked to her sessions in London’s St John’s Wood, including Prince William, Prince Harry, Emilia Fox, Dame Judi Dench’s daughter Finty Williams – children of over 22 nationalities – all entering the world of classical music as introduced to them by their charismatic storyteller. But of course, Ann performed and recorded in English so her unique method of introducing children to great music was restricted to English-speaking children.

Earlier this year, when she was invited to perform at the 26th International Music Festival in Dinard, she was asked how she would communicate with French children. “Well,” she replied, “there is really only one way, isn’t there? In French.” So when most 82 year olds were sitting watching TV, even though she had not studied French for many decades, Ann decided to accept the engagement and take up the challenge.

First she created and wrote an entirely new presentation for France. “Un Panier de Princes” – a Basketful of Princes! – tells the tale of four famous fairy-tale Princes from the Ballets and Operas – floating in a hot-air balloon and boasting about their adventures, each one claiming to be the bravest of them all. Prince Siegfried from Swan Lake, Prince Florimund from Sleeping Beauty, The Prince from The Love for Three Oranges and Prince Ivan from The Firebird.

Translated into French, Ann then began to set the words to the music of Debussy, Tchaikovsky, Prokofiev and Stravinsky. It took months of rehearsal, perfecting her French accent until last week when she flew to Dinard. There she performed for one hour to a packed theatre of enthusiastic and delighted children and their parents who responded to the audience participation and were just as responsive as her young English-speaking listeners are all over the world.

Seated on stage in her famous peacock chair, Ann was greeted with thunderous applause as she came to the end of The Firebird, taking her bow with the glorious red feather that enchanted her young audience.After the performance, a young journalist interviewed Ann – in French of course! When Ann confessed that the last time she had been in Dinard was in 1946 just after the Second World War, the journalist raised a questioning eyebrow. “Well,” said Ann, “I am 82, you know!”

The review in France Ouest reflected her astonishment. “Ann has unbelievable energy” she wrote.

“Children and Music – they are a life-giving prescription!” Ann replied.

They bring you everlasting youth!”

Ann hopes there will be other opportunities for her to perform “Un Panier de Princes” – in French or English – as it proved to be such a hit with her young French listeners in Dinard.

“A BASKETFUL OF PRINCES!“ is a concert specially created for the french-speaking children attending the Dinard Music Festival on August 9, 2015.
Performing in French, Ann transports her young audience to the magical world of brave princes and beautiful princesses.

Four famous fairy-tale princes are floating in a hot-air balloon. To pass the time they each tell their own story to see who is the bravest of them all.

Prince Siegfried from “Swan Lake”, Prince Florimond from “The Sleeping Beauty”, The Prince from “The Love for Three Oranges” and Prince Ivan from “The Firebird”. Listening to the stories, the children will hear the music of Tchaikovsky, Prokofiev and Stravinksy. 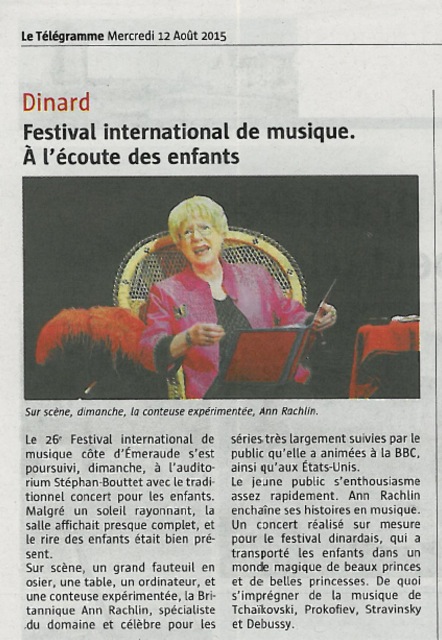 “The young audience quickly became enthusiastic.
Ann Rachlin links her stories to the music.
This was a concert specially created for the Dinard Festival, which transported the children to the magical world of handsome princes and beautiful princesses, whilst absorbing the music of Tchaikovsky, Prokofiev, Stravinsky and Debussy.”